Footage has emerged this week showing cows that have had their stomachs punctured and fitted with ‘windows’ so that researchers can see inside them.
Animal rights activist group L214 have filed a complaint against the French research centre, which is the largest in Europe.

The footage, filmed between February and May, shows researchers performing what is called a ‘rumen fistula’ – a common procedure which is done with a local anaesthetic.

It looks pretty grim, but it’s often done at veterinary schools and apparently doesn’t hurt or affect the animals once it’s been fitted. This also includes research into antibiotics to reduce their use in the farming industry.

However, French TV host Nagui Fam has taken part in the footage and presents it, calling for the practice to stop and saying it is bad for the animals’ health, and for that of humans.
L214 spokesperson Barbara Boyer said: “We obtained the images after a whistleblower who works there contacted us to alert us to the conditions there. We cannot reveal their identity because we have to protect them.

“We have filed a complaint with the authorities this morning.”

After they have been surgically fitted with the window, known as a cannula, that allows access to the rumen for research, they are referred to as fistulated cows. 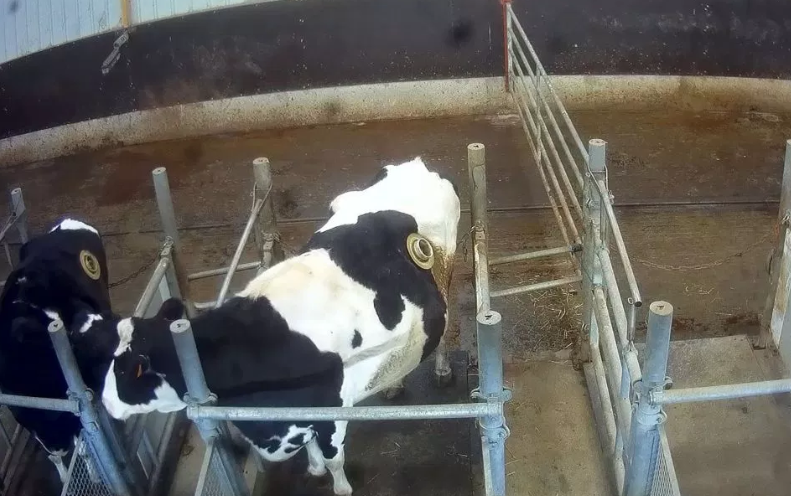 In the video, Nagui says: “There are also chickens at the centre that are so fat that they cannot even walk anymore, as well as very sick pigs, calves and rabbits that are trapped in tiny cages.”

The footage shared by the organisation shows a man putting his whole arm inside a live cow’s stomach.

Nagui says: “For Sanders, these cows are just milk-producing machines that need to have their settings optimised. Today, dairy cows produce on average 27 litres of milk a day, which is five times the daily requirements of a calf.”

He adds: “Other experiments are carried out on isolated calves in small enclosures.

“The pigs only have cold metal as their environment. The rabbits are prisoners in their small cages and they will know only these cages their whole lives. They will never get out.

“And the chickens, which are from fast-growing strains, are fed with a too rich diet and their weight is pushed to the extreme. They can barely walk.”

The research centre, owned by the Avril Group, has defended itself, saying they only have six cows that are fitted with the device and that they need them to study them so they can reduce the use of antibiotics in the farming business.

Avril spokesperson Tom Doron insists the experiments come with ‘rigorous veterinary monitoring and are considered painless for the animal’.