What can you do to look like your favourite character from the celluloid? any idea or guesses? Probably get a haircut like them? Seems like a good option, right? Meet Henry Damon who got under the blade multiple times to look like his favourite  villain from the Marvel Comics!

After he met Emilio Gonzalez who specializes in tattooing and extreme body surgery, he got an idea to transform himself into a Marvel Comics Villain! For most of us, this is the craziest thing we’ve ever heard!

What Do You Think?

Can you guess who this character could be? Well, if you have an answer, head on to the next page to check whether you’re right or not! Come on, all of us know who this is…

Yes, Henry Damon wanted to look like his favourite character: Marvel Comics Supervillain, Red Skull. Wooo, we are interested! And that’s when he decided to get under the blade so much so that he even tattooed the whites of his eyes black.

Further, the most extreme surgery that he underwent was the removal of a section of his nose in order to replicate the nose of Red Skull. Damn!

One of his old friends also told about his long-time desire of looking like Red Skull. He’s not entirely done yet. Read on to see his complete look!

You see that? In the next step, he got his cheek, chin and cheekbone implants. And then his face tattooed red and black

Do you have any views on this? Do let us know in the comments below and don’t forget to head over to the next page to see another completely crazy transformation!

Wait, This Is Crazier!

You think he’s crazy? Here’s one crazier guy who got under the blade 23 times to look like Superman! 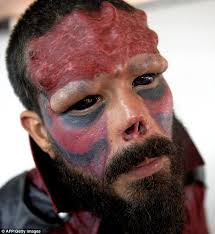 Marry Her if She Has These 9 Qualities